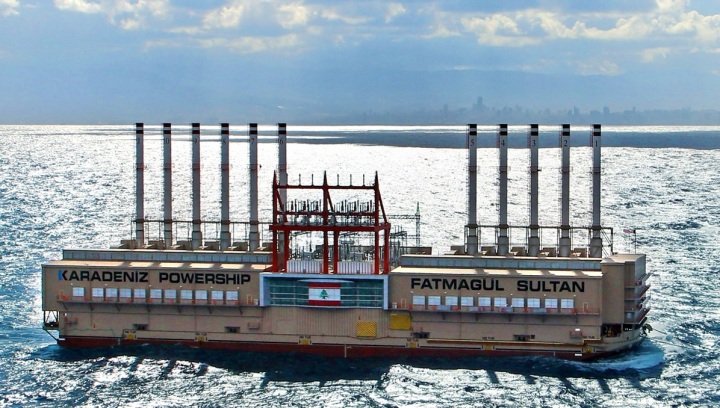 Lebanon’s electricity problem date since 1992 and every minister of energy used to either blame his predecessor, or choose a temporary solution that can appease people’s anger while granting himself a good image. Incompetence and corruption drove many scandals, like the Israeli-made power generators at Zouk plant in 1997 that were concealed under a Cypriot company.

But the latest one is the ship Fatimagul Sultan. In 2012 due to severe lack of energy, a “solution” came from the energy minister at the time Gebrane Bassil to rent the services of a Turkish ship that can provide extra 270 MW. Initially, the deal was for $410 million but a debate regarding an obvious bribe brought down the contract to be inked at $360 million on a three-year period.

Another temporary solution that can’t resolve the electricity issue,

Lebanon is in need of 2,500 MW while production is limited at 1,500 MW, it’s vital to look for new source of energy like Hydropower (rivers and dams), Nuclear (one plant in Bekaa is enough for Lebanon), or Gas (cheap if imported from Iran or Egypt)

FatimaGul Sultan contract will end in 2016 and no plan for long term solutions were studied during these last 3 years, most probably its services will be extended for another 3 years and electricity cutout will remain the same in Lebanon.

In January 2012 a campaign was launched for the new smoking law applicable in September of the same year. Flyers were distributed on MEA flights, banners filled the airport, tons of TV reports, and specialized team on social media flooded the net with LAW 174 and its strict implementation on all Lebanese territory.

Campaign was a total failure when only few establishments respected the new law, while others restaurants and shisha cafes defied the ban and got support from some politicians. It survived for few months without strict application; Law 174 that prohibits smoking in public closed areas is still valid but no longer applied.

In 1996, the Lebanese government gave Sukleen the authorization to collect waste from Beirut and Mount Lebanon and dump it Naameh area. When the landfill was slated to be a temporary solution until a national waste strategy was adopted, it kept on receiving 3,000 tons of waste daily (3 times more than the designated amount) and Sukleen contract was being renewed every year at a higher rate under the pretext of being the best temporary solution. For 20 years, this company distributed illegal profits to the Hariri clan, the Syrians (until 2005), Najib Mikati, Michel El Murr, Walid Joumblatt and many others.

In 2014, the commuters around Naameh area protested the expansion of the dumping area and the pollution it caused, they blocked all roads leading to the landfill and set a deadline for permanent closure on July 17, 2015. Of course, nothing was discussed during this year until the scandal occurred, giving the chance for Sukleen to renegotiate its terms and attract new potential bidders (Riad Al Assad, Walid Joumblat, Jihad Azour). Maysarah Sukkar, the owner of Sukleen paid Marcel Ghanem $100k for a TV appearance on Kalem El Nes, a way to portray himself and Sukleen as the victims of a corrupted government while detaching himself from any political affiliation.

We should not accept any temporary solutions for the garbage crisis, better suffer few months and guarantee the application of a long-term solution to this problem.

Maybe we’re not all concerned by their rights but for sure their public movements affect us all. This is another social case suffering a temporary solution since 1996. Last year and after two decades of promises by the successive governments, rights of teachers and public sector employees led by Hannah Gharib and Nehme Mahfouz took the streets and boycotted official exams.

Their actions paralyzed the public administration as well as all vital roads leading to the capital. Few weeks of intense negotatiation with Minister Elias Bou Saab, backed by a political consensus ended with another promise that expires next year.

Oil On The Coast

At first people were in shock with the news, they started dreaming of a prosperous future for Lebanon, planning what they always envied in Dubai, Abu Dhabi or Qatar. We all remember images of Minister Gebrane Bassil on research vessels looking in binoculars and pointing his finger, as if the oil extraction project was officially launched without ever looking back.

At the same time, Israel was also graphing its coastal border, seriously and quietly. That didn’t prevent some individuals of claiming a theft of Lebanese natural resources by the Hebrew State. In reality, they were in an advanced stage of the project and couldn’t care less about Lebanon; today Israel has two oil platforms in the Mediterranean basin ready to extract oil and natural gas.

Despite being aware of its failure minister Bassil staged this masquerade for two main reasons:

As expected, the project never saw the light, and effective August 1, 2015 Israel started pumping out oil, and minister Bassil changed offices preferring now to defend the fundamental rights of the Christians (sic).

See you next year for another round…

2 thoughts on “Remember, Remember, You Do Remember”