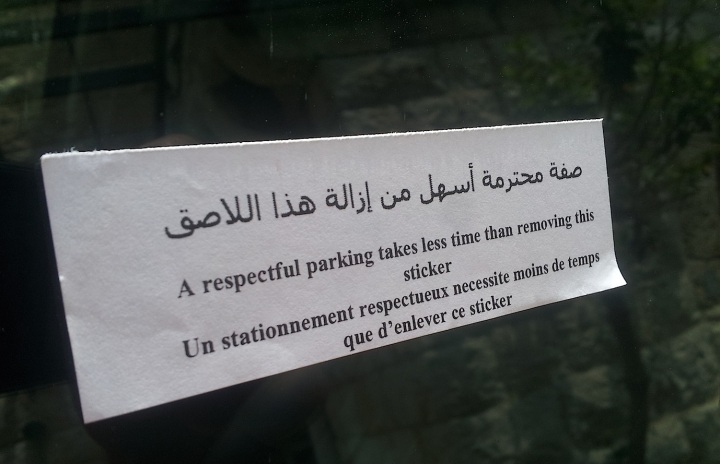 Update: You can download, print and use these stickers (Link)

Few years back I was having an early night walk with friends when a bunch of guys littered their dinner leftovers in the middle of the street. Without hesitation, one of my friends (a woman) quickly and loudly gave the remark on which they replied with a “Chill your nerves Mariam Nour”.

The altercation continued for few minutes and ended when a crowd started to gather around us; if I were the one who made a comment in this incident, it would have turned really badly, and the question would have been, was it worth it?

Once I gave a remark to a reckless father driving with his toddler sitting on his lap, his aggressive reaction was as expected “Mind your own business a**, he’s my child…”

So no, it’s not worth it to be insulted or start a brawl for someone else’s negligence especially with the lack of public laws on your side, but not reacting in any sort is another moral debt for those who believe in a healthier community. That’s where the idea of making every Lebanese a civil vigilante falls in.

Vigilante is any person who tries in an unofficial way to prevent crime or report a violation for better application of laws in a community. In western countries, they’re armed with tasers or rubber bullet guns and take a more serious role by watching neighborhoods around the clock. But what if we teach violators a lesson without any physical harm or high material cost in a way to strengthen ethical and civic responsibilities.

Options are not limited to these 3 ideas, you’re creative enough to come up with new ones.