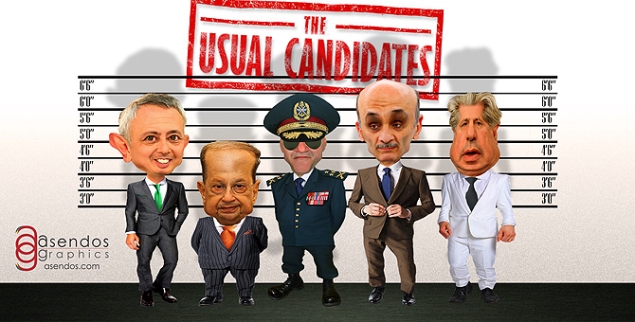 The story revolves around the eager will of four Lebanese to reach the presidential palace. It features “Le General” (Michel Aoun), an old army general during the Lebanese war who is trying after 24 years to accomplish his dream. His maronite marriage with Hezbollah helped him to gain popularity but is acting lately with the party of God like a separated couple.

He secretly approached his political opponents especially “Le Milliardaire” (Saad Hariri), although we don’t see him in the entire movie.

Along with the same alliance of the March 8 movement, comes “Le Chasseur” (Sleiman Frangieh) who publicly supports “Le General” but hopes the public opinion will chose him as an alternative for his ally.

On the other side comes another warlord of the Lebanese war, “Le Docteur” (Samir Geagea) who after being imprisoned for 11 years surprised both his opponents and his March 14 members by presenting his candidature for the presidential elections. A move that triggered his opponents to initiate some cheap-shot actions by bringing back old war stories.  This leaves a chance for “L’opportuniste” (Amine Gemayel) to try his chance for a second time after his infamous reign in 1983 in the role of “Monsieur 10%”.

The length of the movie can be long and boring for some, as this remake of the old movie “1975” was somehow directed away from any regional powers, thus putting the Lebanese parliament in a state of confusion on who to elect in the first round.

The plot continues when each candidate tries to stall the elections until after the Syrian presidential elections and gain support from Western countries as a consensual candidate, which could be the worst option ever for Lebanon. Each candidate continues his battle hoping for his personal interests, but you have to witness the end of the movie that could reserve some unexpected surprises…

“Not the same mistake again…”

Engrossing motion picture that features some of the finest recurring events of our time. The Lebanese people are still giving a chance for people who brought them to the misery they are living in today. We should not do the same mistake again.

This movie is like a game that might occur every 6 years if we don’t put an end to its main protagonists. We are always faced with the same people to choose, what if the Lebanese need young and talented people instead?

What a funny script! The movie would have been better if Aoun never opted for this role, or if Geagea suggested his wife as an alternative…